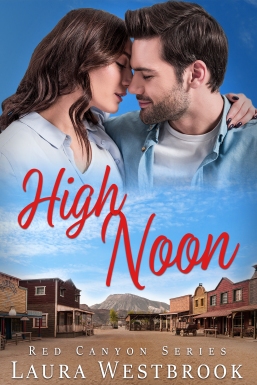 If there’s one thing Lynn hates, it’s dressing up, which suits her just fine working on the set crew of an old west theme park. Wearing jeans and a T-shirt while making set pieces in an old saloon makes her feel right at home. And meeting Luke, one of the actors playing a dashing sheriff, doesn’t hurt either.

But when her boss pulls her into his office and says she’ll be one of those actors, she’s faced with her fear, while also wondering if it’ll position her closer to Luke. Back when she was on the set crew, he barely gave her a second look. Now that she works closer with him, sparks are starting to fly.

When Lynn accidentally gets Luke’s friend fired, everything changes. It’s up to her to find a wild west solution to this modern-day problem and hopefully bag the sheriff at the same time.

If you enjoy sweet romance stories with happily ever afters, no cliffhangers, and a southwestern twist, then you’ll love this third installment in Laura Westbrook’s heartwarming series.

You can find it here (Free if you have Kindle Unlimited):

(and all other Amazon websites)

This site uses Akismet to reduce spam. Learn how your comment data is processed.